GET UP CLOSE FROM A SAFE DISTANCE. TAKE A VIRTUAL TOUR OF YOUR NEXT HOME

The Hunt: Wedded, but Not to Any Particular Place 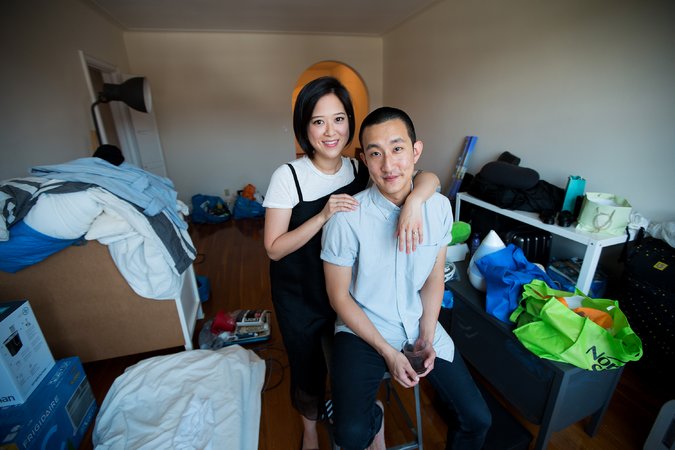 In his eight years in New York, Mike Lee has moved a great deal — sharing rentals throughout Brooklyn and Queens with friends, roommates and siblings.

Three years ago, he and Virginia Chiang met through friends, just months after she arrived in New York from her native Los Angeles. She rented a high-ceilinged studio in Carroll Gardens, Brooklyn.

The two married in a small ceremony last winter. “We would much rather spend that money on a home or a vacation, anything but a one-day party,” said Mr. Lee, who grew up mostly in Connecticut but spent time in Korea before and after his years at Syracuse University.

The couple lived in Ms. Chiang’s studio. She loved her neighborhood, which made up for the noisy upstairs neighbor. “It sounded like he brought home ponies every night,” she said.

After they resolved to buy a studio or a one-bedroom, Ms. Chiang had hopes of staying in Carroll Gardens. But among the first places they saw was a ground-floor studio condominium in Bushwick, Brooklyn, offered for sale by the owner and listed in the high $200,000s. When negotiations stalled, a friend suggested they contact Sunny Pyun, then an agent at Bond New York and now at the Corcoran Group.

“We decided we didn’t know what we were doing and would work with Sunny,” Mr. Lee said.

Meanwhile, Ms. Chiang, who had studied at the Art Center College of Design in Pasadena, Calif., left her job as an Asian art specialist at an auction house to study jewelry design and metalsmithing.

With one income, their budget topped out at $400,000. “Carroll Gardens was pretty dry at that price point,” said Mr. Lee, who works as a writer-producer for PIX 11.

As for the wish list, he said, “I was fixated on proximity to trains, and the commute was for me a weirdly huge factor.”

Furthermore, he said, “easy access to food was a big factor, but who doesn’t want that?” To address both these concerns, he suggested they hunt in Jackson Heights, Queens, near where he had lived for a time. “I had fond memories of the place — good times hanging out there, eating.”

Back in Brooklyn, every place had some kind of fatal flaw, like a ground-floor studio co-op on South Oxford Street in Fort Greene, listed for $359,000 with monthly maintenance in the low $400s. The bedroom window faced the sidewalk. “It was like sleeping in a window display, like visual merchandising,” Ms. Chiang said. (The place sold for $353,000.)

Little was wrong, however, with a one-bedroom on Washington Avenue in Prospect Heights, which had a washer-dryer in the bathroom. The co-op’s price was $389,000, with maintenance around $600 a month. A few doors down, a line of waiting diners extended from Tom’s Restaurant.

“At first I didn’t want to live that close to a restaurant,” Ms. Chiang said. But then she decided such popularity was a good omen for future apartment values.

On one visit, music wafted in the bedroom window. “I thought earplugs were my fate in New York,” Ms. Chiang said. “It’s like an added body part.”

Mr. Lee had become worried about the fierce competition they were encountering. “Sunny told us about all-cash buyers,” Mr. Lee said. “I didn’t know what that meant. I just knew that they were our enemies. Why would anyone have that much cash on them, and if you do, why are you looking to buy a one-bedroom?”

Some apartments there seemed a bit shabby. But one place was a blank canvas — empty, renovated, bright, airy. The 900-square-foot corner one-bedroom was on a top floor with no neighbors. The listing price was $285,000, with monthly maintenance around $700. At the packed open house, “some guy brought his measuring tape,” Ms. Chiang said. “We thought, ‘This is serious, it’s going to be competitive.’ “

Sure enough, a bidding war developed. Still, even when the competition is a cash buyer, “you can show you also have the ability to get the deal done,” said Paul Hyun, who worked with Ms. Pyun at Bond and moved with her to Corcoran.

The couple’s final offer was almost $336,000, well within their budget. It was accepted.

Soon after they arrived in late spring, they noticed a few snags. The bathroom floor was tile on top of tile, which explained why the fixtures were crooked and the shower water pooled on the floor. “I wish they had this rule where you can have a sleepover before you make an offer,” Ms. Chiang said. They plan renovations.

“I am already fantasizing about the next home we buy,” Mr. Lee said, “some midcentury modern home made of glass and concrete, not having to deal with wood and things that break down over time. I just want a house that I can spray down with a hose.”

Still, they revel in the space and the quiet. “It’s been great waking up and not having Virginia tell me she couldn’t sleep last night,” Mr. Lee said.

Please click here to read the article on nytimes.com